of a voxel located at coordinates (

) within the fixed image

and similarly, the intensity

of a voxel at coordinates (

) within the moving image

We want to apply a coordinate transform

could have been obtained from different imaging modalities, we cannot simply minimize the error between intensities

. Instead, we must attempt to maximize the amount of information shared between the two images. The statistical Mutual Information can therefore be used as a similarity metric:

which depends on the probability distributions of the voxel intensities for the static and moving images. We now view

. Note that applying the spatial transformation

will result in modification of

. This effect is implied with the notation

results in voxels being displaced outside of the image,

will change. Perhaps more importantly, if

results in a voxel being remapped to a location that falls between points on the voxel grid, some form of interpolation must be employed to obtain

. These effects are implied with the notation

The method of interpolation used to obtain

is important both in terms of execution speed and solution convergence. Here we will discuss the Partial Volume Interpolation method proposed by Maes et. al.

Figure 1(a) depicts the situation where

has displaced a voxel (red) to the center of a neighborhood of 8 other voxels (black). The interpolation method divides the volume defined by the 8-nearest neighbors (red) into 8 partial volumes (w1 - w8) that all share the red voxel’s location as a common vertex Figure 1(b-c). We can more formally define the 8 partial volumes as a function of 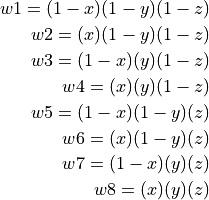 Once the partial volumes have been computed, they are placed into the histograms of their corresponding voxels in the 8-neighborhood. Partial volume

is placed into the histogram bin associated with

, etc. This method is used in computing both

We now have a complete expression for the mutual information similarity metric, which we will use as a cost function that describes the quality of the registration.

We can attempt to achieve the optimal registration by maximizing this cost function, which is achieved through modification of the coordinate transformation

applied to the moving image

. It is important to note that the

could be any type of conceivable coordinate transformation. For example,

could represent a set of affine transforms to be applied to the moving image. Here, however, we will be focusing on a parametrically defined nonrigid coordinate transformation. The transformation

is characterized by the displacement field

, which defines how individual voxels within the moving image

should be displaced such that

are optimally registered. This displacement field is computed at every voxel given the B-spline coefficients

defined for the sparse array of control-points:

) forms the voxel’s offsets within the region bound by the 8 control-points in the immediate vicinity of the voxel. For simplicity, we refer to such a region as a tile.

Having defined the coordinate transformation

, it is becomes apparent that the mutual information may be maximized through optimization of

. If this is to be accomplished via the method of gradient descent, an analytic expression for the gradient

must be derived. The chain rule is employed to separate the expression into two partial derivatives with the first being dependent on the similarity metric employed and the second on the type of transform employed:

Referring again to the first term of (5), it is important to realize that

are coupled through the probability distribution

and are therefore directly affected by the 8 neighborhood partial volume interpolation. This becomes further apparent when

, describes how the joint distribution changes with the vector field. Explicitly stated, a displacement vector locally transforms the coordinates of a voxel in the moving image

From Figure fig:pv8 it becomes immediately apparent that as the vector field is modified the partial volumes

to be inserted into the moving and joint histograms

will change in size. Consequently,

can be found for

by taking the derivative of (2) with respect to each of the Cartesian directions.

Therefore, as prescribed by (6), computing

at a given voxel in

for each, which is scalar and therefore the same for all Cartesian directions. The 8

values are each weighted by one

. Finally, once this process has been completed for all 8 bins, the resulting

values is assimilated into the sparse coefficient array

by way of (5). Once this is completed for all voxels, the next optimizer iteration begins and the process is repeated with a modified coefficient array

It is important to note that if all 8 histograms associated with the neighborhood are equal, the value of

. This is a direct result of

and similarly for the

-directions. However, when the 8 histograms within the neighborhood are not equal, this will result in the gradient

being “pulled” in the Cartesian direction of voxels associated with large

, which is desirable when attempting to maximize MI.